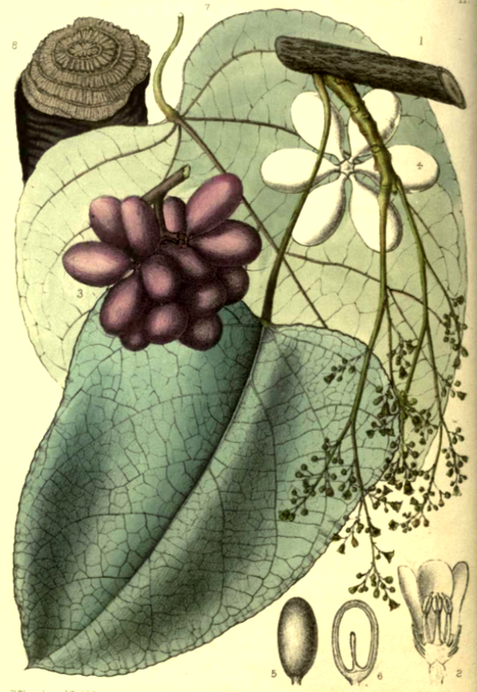 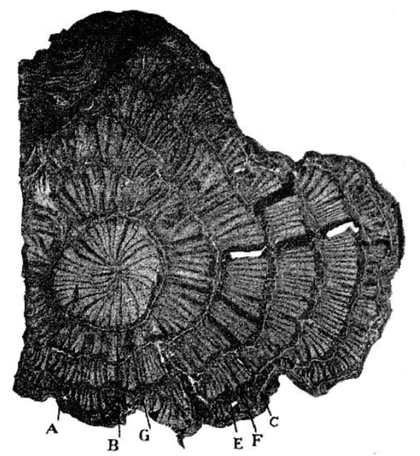 Cross-section of the root
Manual of Organic Materica Medica, Sayre, 1879

COMMENT:
1. Curare, obtained from this and related plants has been used as a paralyzing arrow poison by native South Americans.
2. Tubocurarine chloride is used as a muscle paralyser during surgery.

Cautions:
1. Toxic in overdose. Its use is restricted in many countries.
2. Not used during Pregnancy

TOXICITY:
1. Toxicity is especially associated to its toxic compounds entering the bloodstream. So for example, cuts or sore in the mouth can produce toxic reactions due to the toxic compounds directly entering the blood. If there is no direct route into the bloodstream it is relatively safe in therapeutic doses.
2. 'Overdoses of tubocurarine (and other curare alkaloids) can cause respiratory paralysis and hypotension'. (Duke)
3. LD50 of the alkaloids is less than 1mg/kg in mice.

Tincture of Pareira:
Pareira root           1 part
Alcohol (50%)       5 parts
Dose: 50–70 drops. (Wirtemberg)
History
'Pareira brava (Chondrodendron tomentosum) is a climbing shrub, native to Peru and Brazil. and adjacent sections of South America. The Portuguese missionaries of the seventeenth Century who visited Brazil learned of its reputed qualities from the natives, who under the name abutua or butua valued it highly for its therapeutic virtues. The Portuguese gave it the name Pareira brava, or wild vine, with reference to its mode of growth. Its reputed medicinal qualities, learned from the natives, were made conspicuous by Michel Amelot, ambassador of Louis XIV to Lisbon, who found it in that city and carried it with him to Paris. The botanist Pomet, 1694, described the plant in his "History of Drugs," Paris. After an eventful botanical record embracing considerable discussion as well as confusion with some other drugs, during which Pareira brava enjoyed professional conspicuity in Europe, it dropped from general use, the extraordinary pretensions long made for it being now practically forgotten.' (History of the vegetable drugs of the Pharmacopoeia of the United States, Lloyd, 1911)
© MedicineTradition 2015–2022