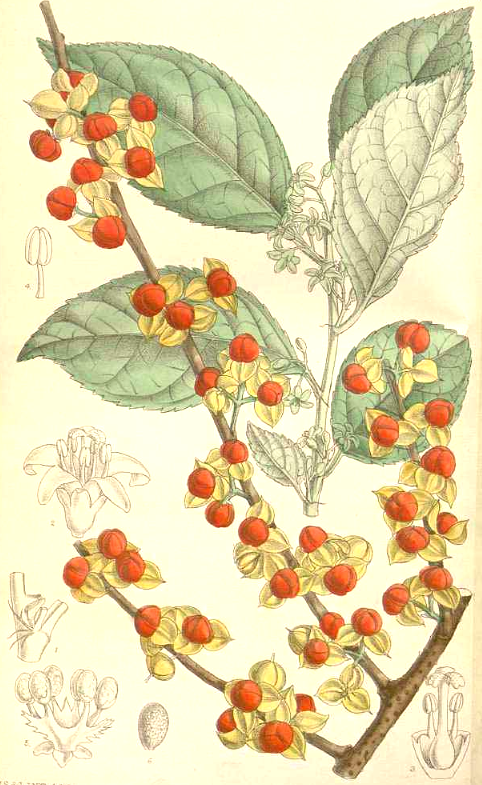 6. Warms and Strengthens the Stomach:
-Indigestion from weakness of the Stomach
-abdominal disorders from cold

8. Externally:
-Indolent Sores and Ulcers (seeds)
-herb is smoked for Phlegm conditions of the head

COMMENT:
1. The Chinese (TCM) and Indian (Ayurveda) species appear to be similar in appearance and use and are probably synonymous medicines.
2. The American C. scandens was listed by King's for 'scrofula, secondary syphilis, chronic hepatic affections, cutaneous affections, leucorrhea, rheumatism, and obstructed menstruation.' Its use suggests it may have a similar therapeutic profile. King's also notes it has 'some narcotic powers' which may partly explain its effects of the Mind and Nerves.

SUBSTITUTE:
1. Celastrus has been used as a substitute / adulterant of Albizia. Conversely, Albizia (bark or flower) may be used in place of Celastrus.
2. Clove (for the seed), Clove oil (for the oil)

Cautions:
1. May cause nausea or vomiting in large doses. Not used in cases with vomiting.
2. Not suitable for use in Heat / Bile diseases. Large doses causes Burning sensation.

TOXICITY:
The oil was given to rats in doses of 5 grams per kilo with no negative effects.