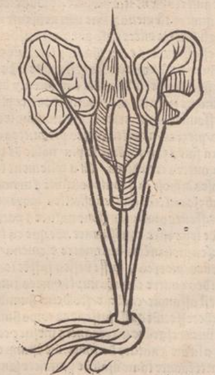 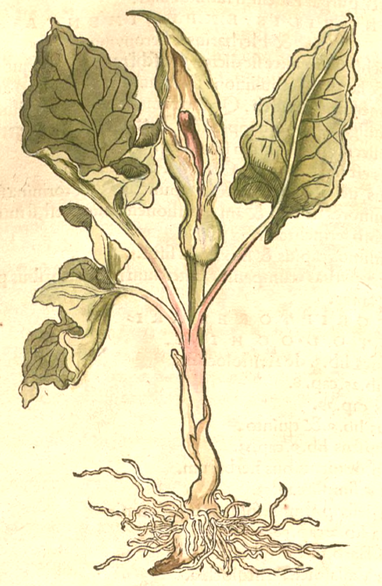 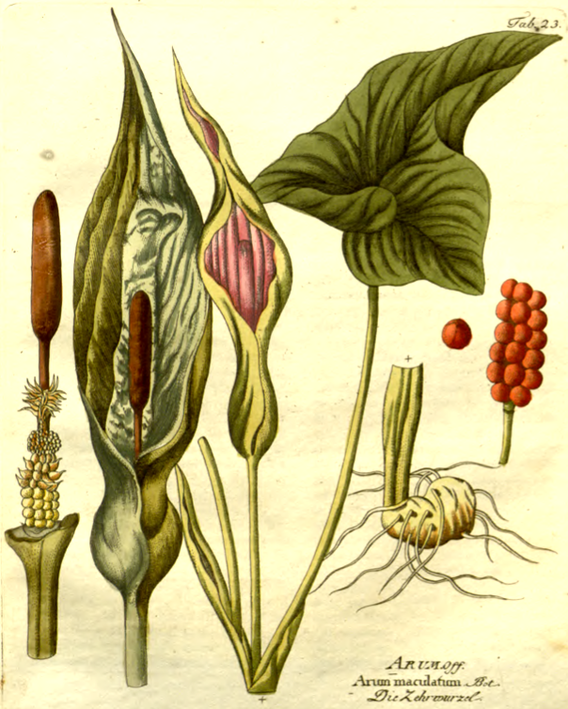 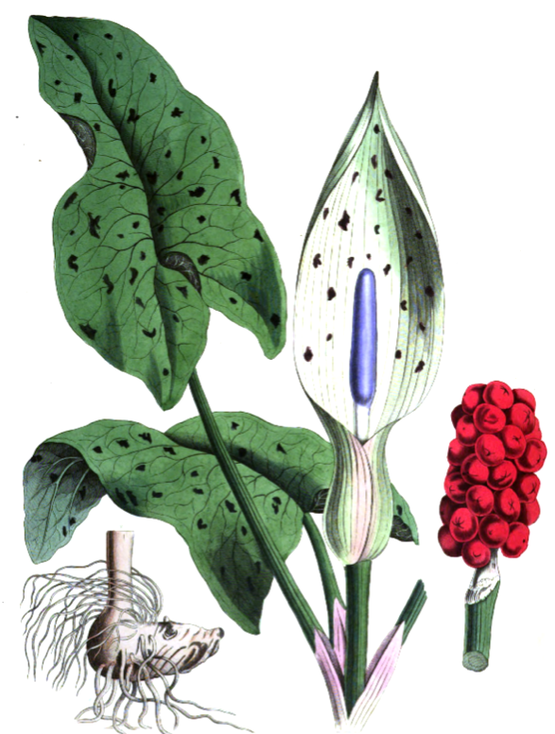 The Chinese Arums (Ariseama):
The 2 following species are found in Western China, and are examples of the typical species used in TCM. They are similar in their type and flower, only having a number of leaves per stem, or else deeply divided leaves as opposed to the Western Arum that has one large leaf.

Botanical name:
Arum spp.
Arum and Ariseama are very similar and related genus. Often, the two are synonymous, as with the American Jack-in-the-Pulpit or Wake Robin which is known as Ariseame triphyllum, syn. Arum triphyllum. Likewise the Chinese species now classified as Arisaema were previously classed as Arum.

The main species used in the West are:
1. A. maculatum (Common Arum, Wake Robin)
2. A. vulgare
3. A. arisarum (Hooded Arum)
4. A. italicum
5. A. dracunculus (syn. Dracunulcus vulgaris or Dragon Wort)
The following two varieties are used in the Mid East, synonymous with or similar in use to A. maculatum:
6. A. dioscoridis
7. A. palaestinum

In Tibetan Medicine, Da Ba is obtained from Arisaema flavum, A. intermedium, A. lobatum, A. consanguineum, It is synonymous with the Tian Nan Xing of TCM and the Arum root of the West, Typhonium giganteum also being listed by some sources (this being a medicine used in TCM to clear Cold-Phlegm in the same class as Arisaema species above).

COMMENT:
It is premature to say all the above species are synonymous. However, the genus is regarded as Hot and dry and toxic with pungent and bitter taste. In East and West they are all used to cut through tough and Cold-Phlegm, and are used for Cold-Phlegm Lung diseases as well as Tumors and Masses from Cold-Phlegm obstruction. In each system, when the root is used it is prepared to detoixify it. Therefore, we believe the prepared Chinese Tian Nan Xing is a suitable and pehaps safer form of this medicine to use, especially when used to clear tough, cold phlegm and resolve thickness and tumors.

Parts used:
Prepared Root
In some instances the leaves or seed are used.

Temperature & Taste:
Hot, dry, Pungent, Bitter. Toxic
It is particularly Pungent and irritant when fresh, but loses much on drying and becomes a little mucilaginous. The Pharmacopoeia Universalis (Jourdan, 1833) went as far as to say the dried root is 'nearly inert'.
Resolves, discusses

5. Resists Poison (West):
-used in Antidotes; bites of venomous Snakes
-the root is taken for toxic and black Sores, Boils, Carbuncles (Botanicon Continens Herbarum, Dorsten, 1540)
-root was eaten during times of Epidemics at the time of Hippocrates

6. Externally:
-distilled water is a good cosmetic removing spots of the face and making the skin shiny.
-root with honey applied to remove freckles.
-also to remove films of the eyes (with Honey)
-topically to Piles
-the juice is excellent for all types of Ulcers, including Cancerous Ulcers (Pliny, Tibetan Medicine)
-used for excess granulation in healing Wounds and Ulcers (Tibetan Medicine)
-topically for Phlegm swellings and Masses (the unprepared, dried root is usually used)
-topically applied to Fractures
-used to prevent bony growth and outward growth of bones after bone-setting (Tibetan Medicine)
-applied to the genitals to promote Labor
-fresh leaf beaten with Honey is applied to Abscesses (Hippocrates)
-leaves boiled in Honey are applied to sprains (Pliny)
-leaves with wine and oil are applied to Burns (Pliny)
-leaves beaten with Salt and applied to Arthritic joints (Pliny)

PREPARATION:
Western writers noted that the fresh root conatins a milky, acrid irritant juice, but this was greatly reduced when dried. Some ancient authors considered such medicines 'prepared' after they had been kept for a certain amount of time. A year or two after drying, the roots are far less irritant.
1. In the Western Tradition Arum is prepared by slicing, steeping overnight in vinegar, then drying. Some would dry or partly dry the root before infusing in vinegar while others appeared to put the fresh root directly into vinegar. After steeping in vinegar they should be dried quickly which can be achieved by patting them dry, then heating in an oven at around 80 degrees C. for an hour or so.
2. Prepared Arisaema Zhi Tian Nan Xing (TCM) is prepared by steeping the root in water for a couple of days, changing the water several times each day, then Alum is added to the water and soaked another day. Then fresh Ginger and Alum are decocted together and the root is boiled with them. The root is sliced and dried. This greatly reduces toxicity and makes its stronger to clear Phlegm and Damp (Bensky). The use of Alum serves to counter the Hot poison, as well as adding to the drying and phlegm-relieving effect.
3. Prepared Arisaema Dan Nan Xing (TCM) is Bile-Prepared Arisaema. The prepared Root is powdered and mixed with Cow or Pig bile, then steamed, cut and dried. Or it is fermented with Bile, then steamed and dried. This is not prepared by practitioners by is factory-made. It is regarded as stronger the longer it is stored. It is stronger for Phlegm-Heat and Wind, stops Tremors; used for Childhood Convulsions, Tremors, Seizures, Convulsions, after Strokes etc.
4. The unprepared, dried root is only used in some external medicines.

DOSE:
Pliny mentions the root being decocted in milk for Ulcers of the Intestines.
Prepared Root in Powder: 5–10 grains (325–650mg), to 20 grains (or half dram);
The root powder mixed with twice its weight of Sugar or Honey and formed into an Electuary is taken in doses of 1–2 drams.
Of the Prepared Chinese Root (Zhi Tian Nan Xing): 500mg–1.5 grams of the powder; 3–9 grams in decoction.

COMMENT:
The Arum / Arisaema species of the East and West have been used quite similarly. As the Chinese product is easily available and has been prepared both to reduce toxicity and enhance the effect of clearing Phlegm and Damp, it can be used in places where Arum is called for in western formulas.
Main Combinations:
In TCM, Prepared Arisaema Zhi Tian Nan Xing is combined with Citrus peel Chen Pi and Pinella Zhi Ban Xia for Cold-Phlegm obstructing the Chest with Cough, Wheezing and hard-to-clear Phlegm.
In the West, prepared Arum was commonly used with Calamus for Phlegm-Damp, and especially for the Stomach.

Cautions:
1. Irritant and toxic when fresh, not dried properly, or taken in overdose.
2. Not suitable for Yin deficient (dry) conditions or conditions with Heat.
3. Not used during Pregnancy

Conserve of Common Arum:
Root, bruised to a pulp (1 part), Sugar (2 parts)
Some used one part root to 3 parts sugar.

Fecula of Arum (Arum Starch): grate the root, put into a linen bag and press hard. Add a little water to the juice and set aside. Pour of the clear water and dry the sediment with a moderate heat, then powder and keep.
<
>
Click the Tabs above for more information on this Medicine
Pliny on Arum maculatum:
Pliny on Arum arisarum (Hooded Arum):
Arum spp.
Arisaema spp.
Copyright © 2015–2020