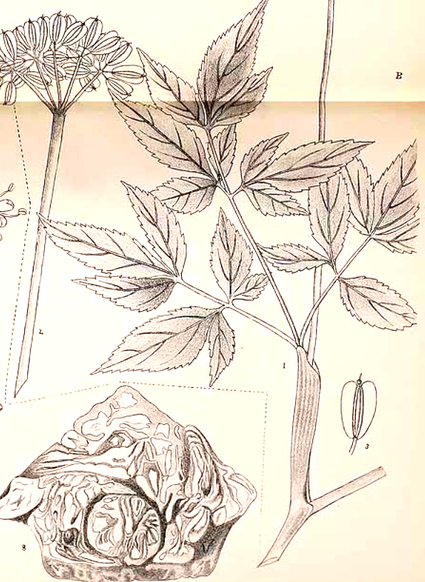 2. Warms the Kidneys:
-Edema from Cold

COMMENT:
Angelica glauca appears to have functions and indications simiilar to Angelica archangelica of the Western Tradition ('Angelica'). Gyatso mentions the latter as a substitute for Angelica glauca, and several sources have indicated that A. archangelica is collected indiscriminately with A. glauca in the Himalayas. Frawley in 'Yoga of Herbs', however, claims it to have tonic properties resembling Dang Gui.

SUBSTITUTE:
1. Angelica archangelica (Angelica) can generally replace A. glauca, Lca ba of Tibetan Medicine.
2. When used as a tonic, such as when it is used in the 'Five Roots', Dang Gui may be more suitable.
Main Combinations:
It is used in the combination, Five Roots: Angelica glauca, Soloman's Seal, Tribulus terrestris, Mirabilis himalaica, Asparagus root. These Five roots warm and strengthen the Kidneys, benefit Yin and Blood. As a unit, they are often combined where tonification is required, such as in chronic joint disease, weakness or rigidity of the limbs and paralysis.
The general appearance and form of A. glauca is similar to Angelica. It is perhaps similar to the Wild or Mountain-gathered variety of Angelica that was sometimes used in Europe, being smaller and more hardy than its lush lowland and garden relatives.

Cautions:
1. Not used during Pregnancy
2. See Angelica archangelica for more

DRUG INTERACTIONS:
Use carefully i people on Blood thinning medicine and it may potentiate the effect.